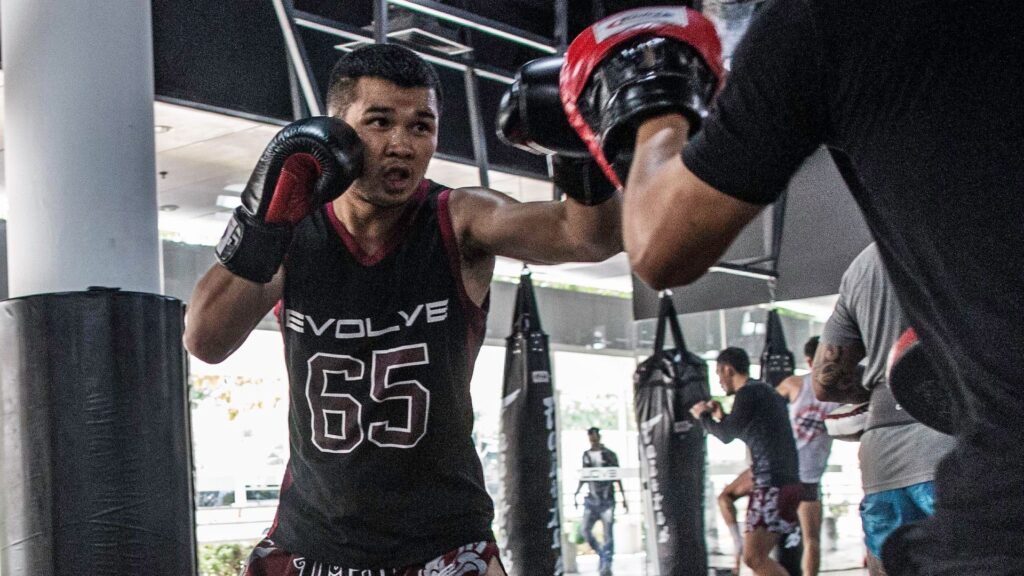 Developed over hundreds of years, the ancient martial art of Muay Thai is known for its tremendous power, maximum efficiency, and raw simplicity. Often referred to as the “Art of Eight Limbs”, Muay Thai utilizes a beautiful symphony of kicks, punches, knees, and elbows with fluidity and grace.

Muay Thai is now one of the most well-known and practiced martial arts in the world. It has proven to be effective, which is why it is most common striking base in the vastly popular, fast-growing sport of mixed martial arts.

1) It is widely recognized as the most effective striking art in the world. 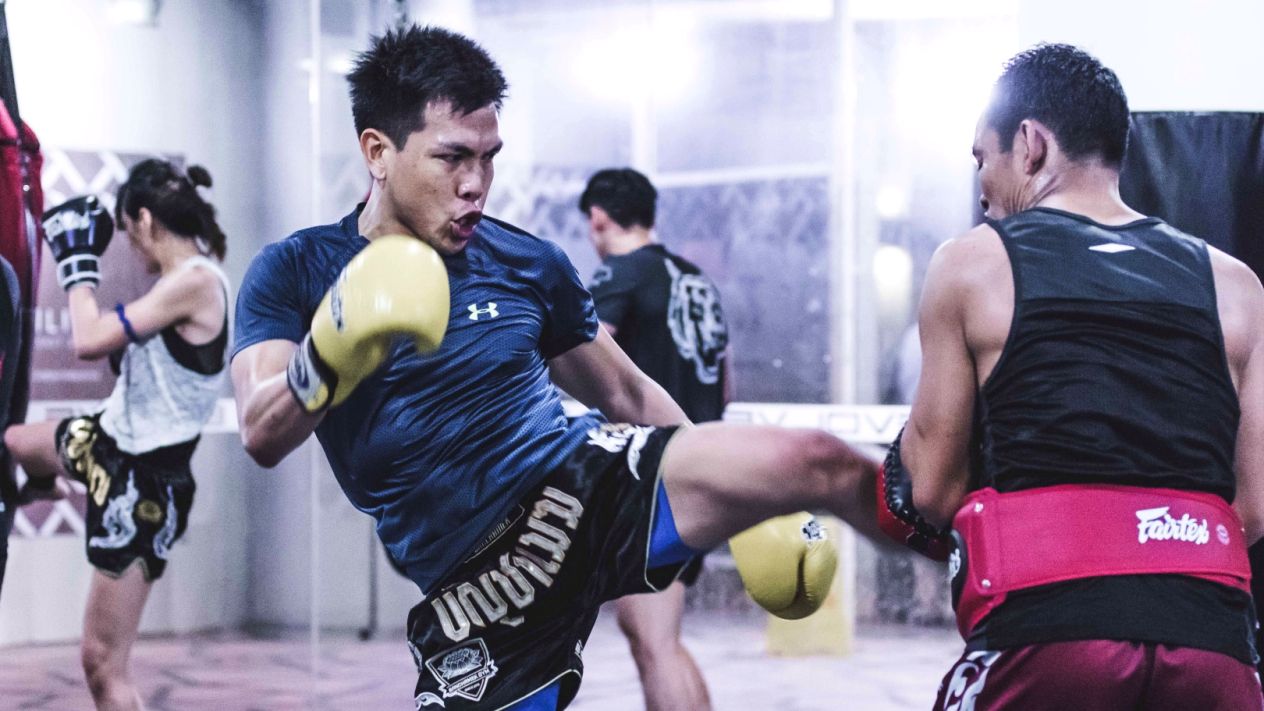 A student smashes the pads during a Muay Thai class at Evolve MMA (Far East Square) in Singapore.

Muay Thai is by far the most effective striking art in the world and has a lot of history. Muay Thai has been tested in competition and real-life situations for hundreds of years, refining the art to be as fast, efficient, and powerful as it can be. On top of that, its consistent testing in combat between highly skilled practitioners has developed every aspect of the art to an extremely high level.

So if you’re looking for a martial art that has practical uses in the real world, then Muay Thai is your answer.

2) It is effective in all ranges of standup fighting.

Throughout the course of a Muay Thai class, you will practice kicks, knees, elbows, and punches.

Muay Thai is a martial art and combat sport unlike any other. The art incorporates the use of knees, elbows, shins, and hands. This allows the practitioner to use all the weapons available to the human body in kicking range, punching range, and the clinch, making it effective in all ranges of standup fighting unlike most other striking based martial arts.

3) It is simple and easy to learn. 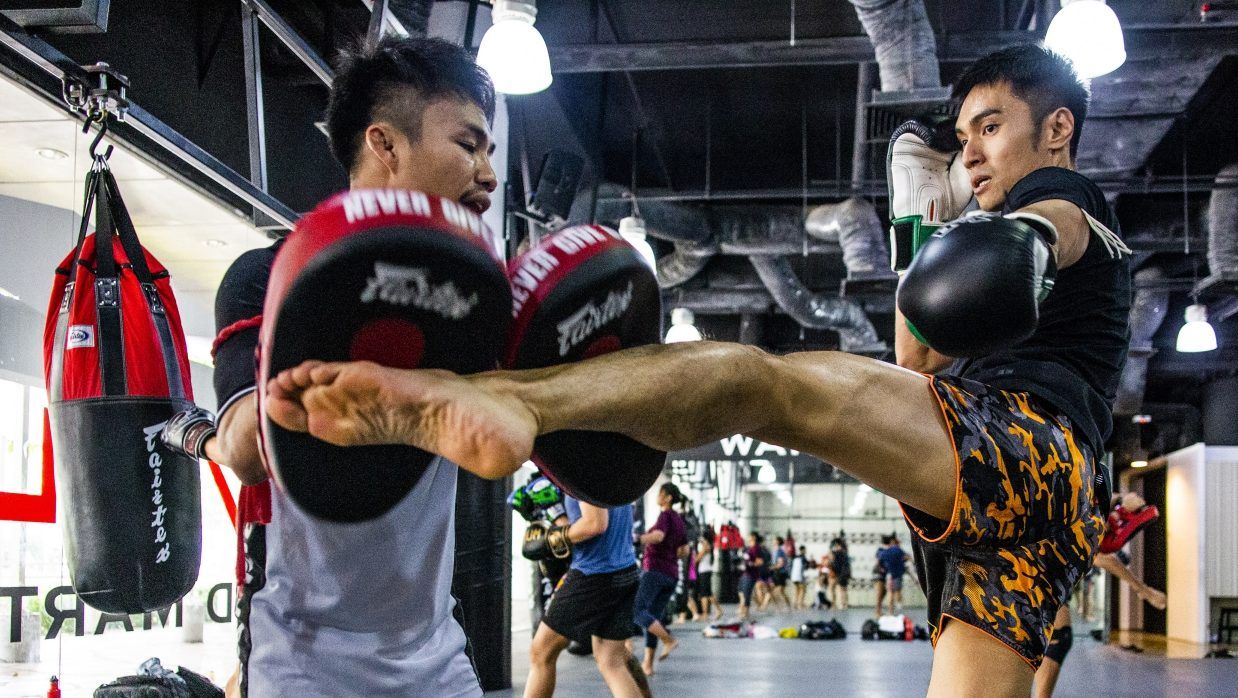 With Muay Thai, the harder you work in the gym, the better you will look come fight night.

While there are hundreds of different techniques in Muay Thai, it is also a martial art known for its raw simplicity. That’s why Muay Thai is for everyone: men, women and children alike. In Thailand, it is actually more common for practitioners to start as young as five or six years old. So no matter your age or fitness level, there’s a Muay Thai class that will work for you.

4) It is highly effective for self-defense. 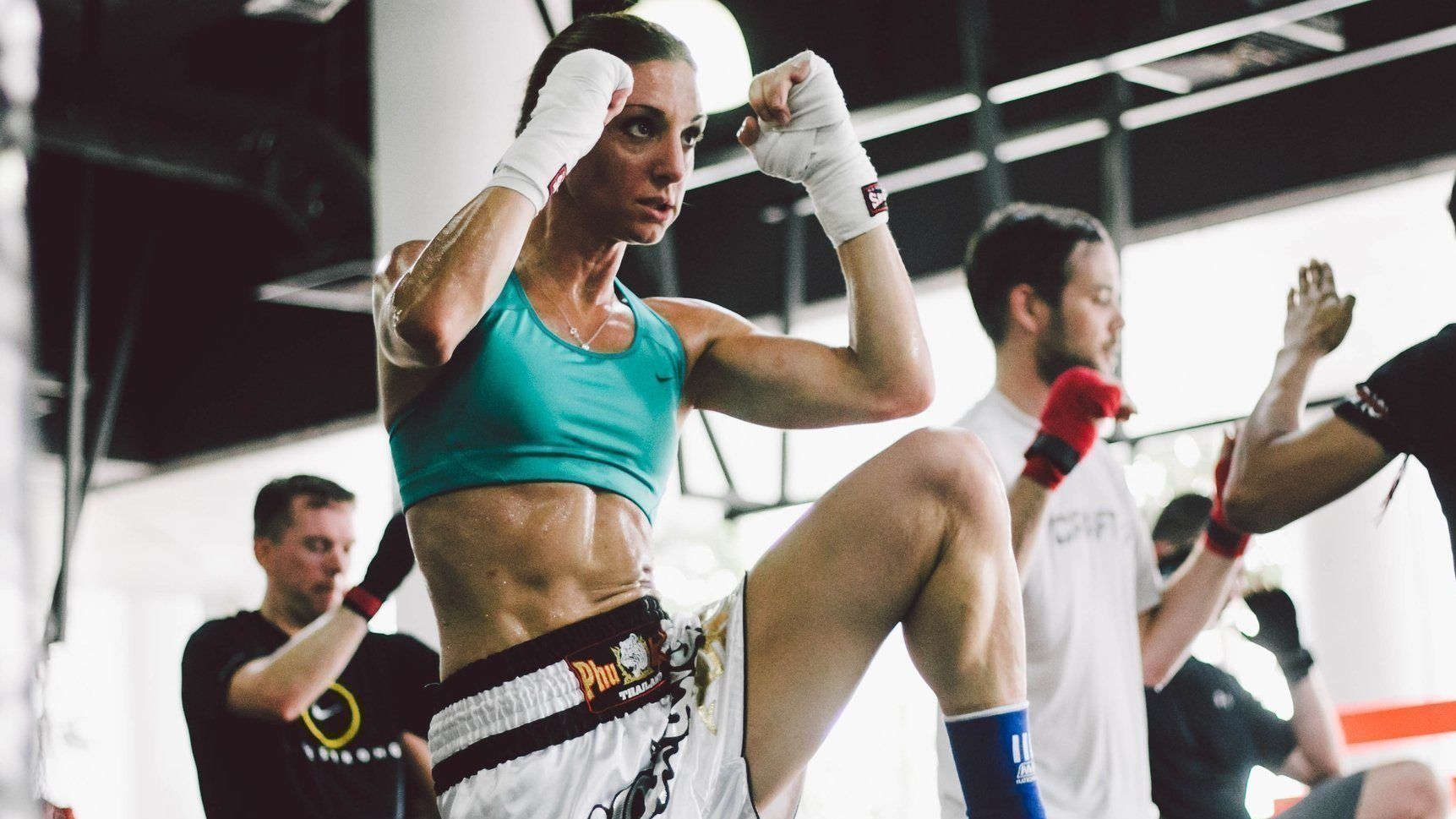 The techniques you learn in a Muay Thai class can keep you safe on the street.

Muay Thai is also one of the few martial arts in the world that has been undeniably battle-tested and street certified for real-life encounters. Although widely regarded as a striking based martial art, Muay Thai also contains throwing techniques, locks, the using of an opponent’s own momentum, and even submissions.

5) It is both an aerobic and anaerobic workout. A Muay Thai gym is a place to push yourself to the limit to become the best version of yourself.

Muay Thai is specifically designed to promote the level of fitness and toughness required for ring competition even for recreational practitioners. With running, jumping rope and shadowboxing it provides an aerobic workout to prepare you for more intense workouts. Muay Thai also builds great anaerobic endurance with exercises like punching and kicking on the pads or bags, and clinching to work your body to its limits.

This makes Muay Thai, not just a perfect martial art, but also a very effective form of exercise. With continued training, Muay Thai will vastly improve your strength, dexterity, and cardiovascular performance.

Nothing spells perfect more than a martial art with the ability to help you burn 1,000 calories an hour. Muay Thai is the standard of a perfect total body workout. It is a fun and efficient way to burn fat and lose weight that also builds your core, flexibility, and overall strength. The full-body workout that Muay Thai gives you can take your health to the next level.

7) It toughens your mind, body, and spirit. 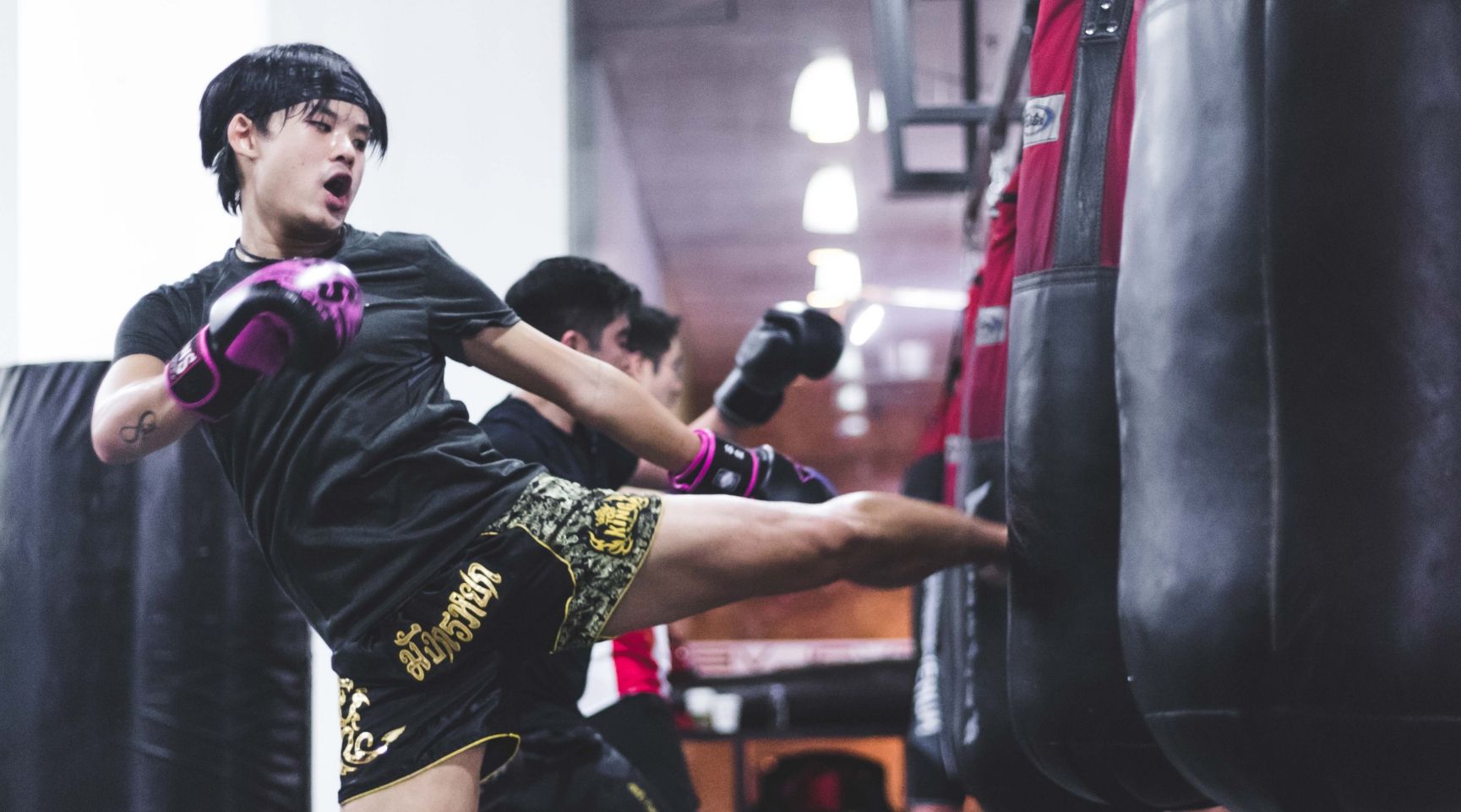 A student perfects his technique on the heavy bag during a Muay Thai class at Evolve MMA (Far East Square) in Singapore.

The art of Muay Thai toughens your mind, body, and spirit. As the late great Muay Thai Grandmaster Kru Yodtong Senanan once said, “Muay Thai is good for your confidence and inner strength.” On top of enhancing your physical conditioning, Muay Thai builds confidence and promotes discipline of the mind through the control of emotions and feelings.

8) It is one of the key foundations for the sport of MMA. 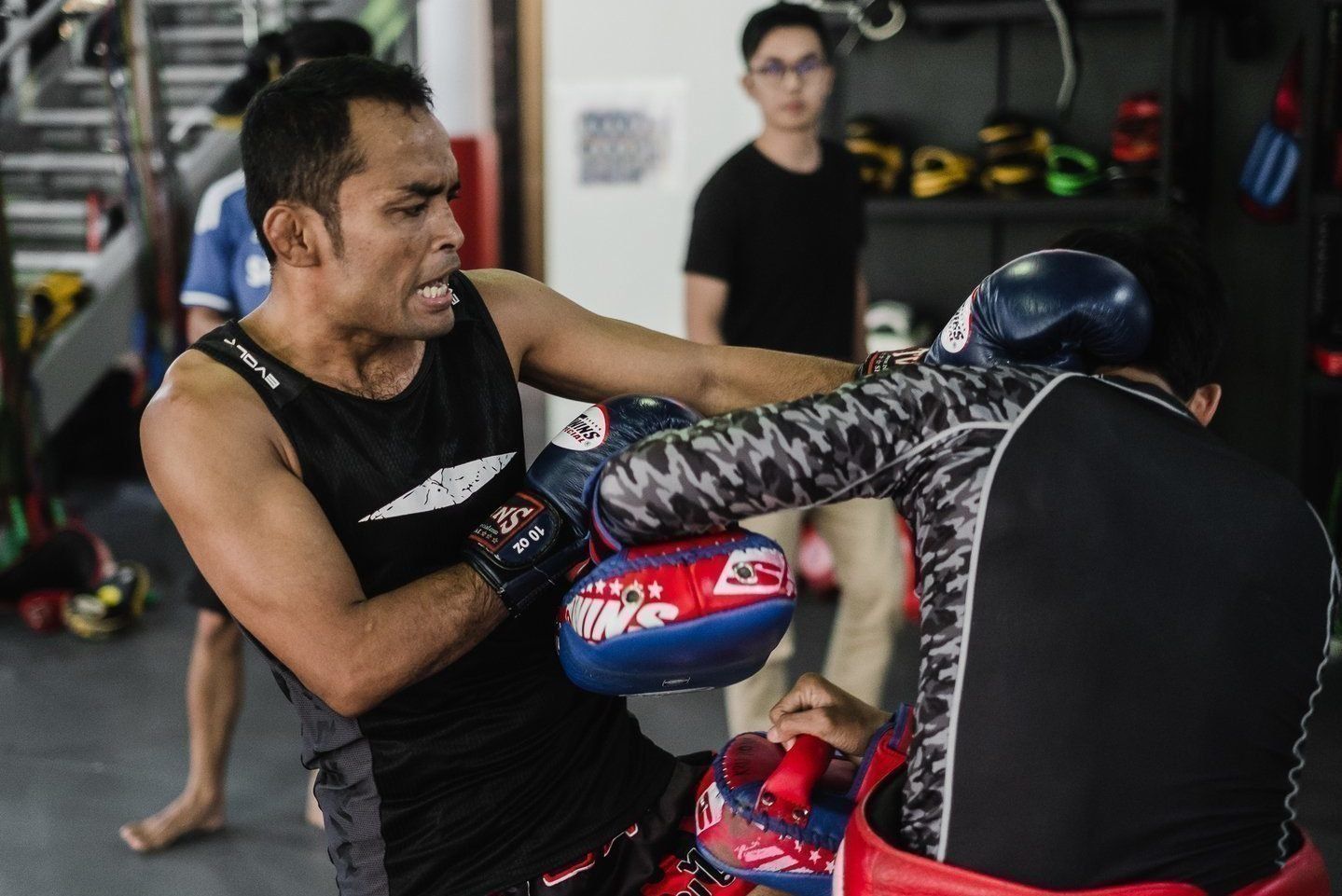 As the most effective striking martial art in the world, it is no wonder why Muay Thai has become one of the key foundations of the vastly popular, fast-growing sport of mixed martial arts (MMA). Some of MMA’s greatest fighters and champions use the art of Muay Thai as their main striking base. Muay Thai’s vast range of techniques allows an MMA fighter to have many tools to use during a fight.

One of the biggest misinterpretations of Muay Thai is that it is just a sport of violence. But like many martial arts, Muay Thai also cultivates important values that are rooted in rich tradition. It has the power to humble, discipline, and also inspire, which is arguably the most important aspect of any martial art. Muay Thai instills in its practitioners many great qualities including courage, humility and warrior spirit. These qualities will no doubt help you unleash your greatest potential in all areas of life.

To sum it all up, Muay Thai is beneficial for just about anyone. But remember, it is also up to the practitioner to make learning this perfect martial art even more enjoyable and enriching.

So if you’re looking to reap the benefits Muay Thai classes provide, sign up for a trial class today!

9 Reasons Why Brazilian Jiu-Jitsu Is The Perfect Martial Art